Discussions with potential strategic partners underway
for the development of Kamoa

The proposed Nzilo 1 upgrade is in addition to the planned upgrades by Ivanplats of the Mwadingusha and Koni hydroelectric plants. The three plants could produce a combined 200 megawatts of long-term, clean electricity for the grid, which would be more than sufficient to launch production at Kamoa. 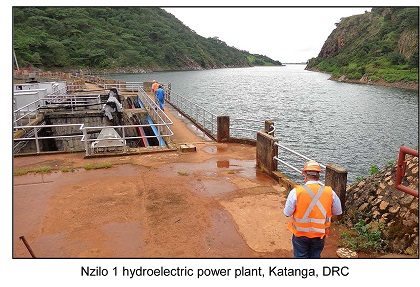 Following the signing of the memorandum of understanding (MOU) this week, Ivanplats and La Société Nationale d’Electricité (SNEL) plan to conduct a Feasibility Study to assess the scope of work, and cost of restoring Nzilo 1 to its design capacity of 111 megawatts (MW).

The Nzilo 1 plant is on the Lualaba River, downstream of Nzilo Lake and north of the city of Kolwezi, in Katanga, approximately 40 kilometres from the Kamoa Discovery. Nzilo 1 was commissioned in 1952 to supply power to nearby copper mines in the Kolwezi region of the Democratic Republic of Congo (DRC), but now it is only partly operational due to the age of the installed generating equipment.

The MOU provides that Ivanplats would finance the refurbishment through a repayable loan to SNEL and SNEL would grant Ivanplats a priority entitlement of power from the power grid.

“As is the case with any major mine development project, a dependable supply of electricity is a key consideration in planning production rates at Kamoa,” said Mr. Friedland.

“Anything we can do to assist SNEL to improve the capacity and reliability of the supply of sustainable, cost-effective hydropower to the national grid in the Kamoa region could potentially allow us to increase the mining and smelting capacity at Kamoa to a level significantly higher than our planned initial mining rate of 7.5 million tonnes a year.”

Mr. Johansson said that the bilateral cooperation between Ivanplats and SNEL to secure reliable power for Kamoa underscores the importance that the DRC government places on the development of large-scale mining projects in the country.

Ivanplats also is continuing to investigate potential sites for greenfield hydropower projects to help ensure the long-term supply of reliable electrical power to the Kamoa region. 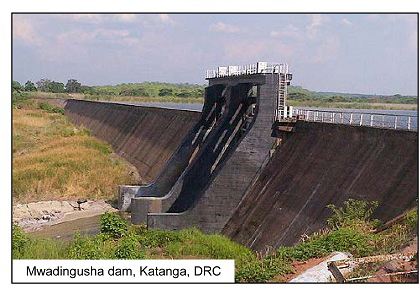 Mr. Friedland also announced that a positive Feasibility Report has been completed for the generation of sustainable hydroelectric power capable of supplying initial requirements for Ivanplats’ development of its Kamoa copper discovery.

The report identified the scope and cost of work required to upgrade two existing hydroelectric power plants in Katanga - Mwadingusha and Koni - to provide sufficient electricity to the national grid by early 2017 to allow Ivanplats to obtain power for the Kamoa Mine’s first phase of commercial production. In the interim, development and construction activities at Kamoa will be powered by electricity sourced from the grid and on-site diesel generators. The report was prepared for SNEL by Stucky SA, of Renens, Switzerland, a leading international engineering firm that has completed assignments on more than 100 major hydropower infrastructure projects worldwide.

The Stucky Report recommended that SNEL proceed with the upgrading of the Mwadingusha and Koni plants, through an investment by Ivanplats, to a combined capacity of at least 108 MW. The authors of the report believe that when the upgrades at the two plants are completed, the combined capacity could reach 125 MW. The report concludes that the rehabilitation of the two plants would secure a long-term, reliable supply of clean electricity to support Ivanplats’ development and operation of the Kamoa Mine. The report also concludes that the rehabilitation project would be beneficial for SNEL, providing the DRC with two completely rehabilitated power plants in a relatively short period of time, with increased installed capacity and guaranteed sales over the long term, without requiring a large, up-front outlay of capital by SNEL. 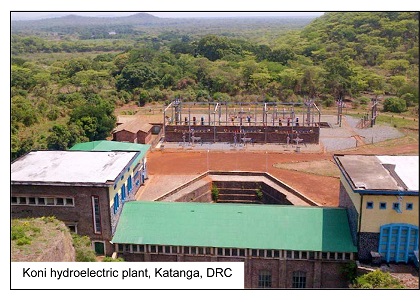 Ivanplats and SNEL established the framework for the commercial terms of the development in a 2011 MOU, which would see power from the Mwadingusha and Koni plants fed into the national grid, and the grid would supply 100 MW to Kamoa after the completion of the plant upgrades.

Ivanplats believes that 100 MW would be sufficient for the infrastructure for the initial phase of mine development, which presently envisages an initial mining rate of 7.5 million tonnes per annum, with an associated onsite smelter. Surplus electricity generated by the upgraded plants would be available to SNEL for sale to residential and commercial consumers.

“The Feasibility Report confirms the viability of our approach to invest directly in the supply of electricity, which is one of the foundations of our plans for Kamoa’s early development,” said Mr. Friedland.

“The installation of modern power generating equipment at the existing Mwadingusha and Koni dams will secure hydropower for our Kamoa Project in a relatively short timeframe, reduce greenhouse-gas emissions, help to ensure reliable, affordable energy for future generations and maximize regional economic benefits in Katanga.”

The Mwadingusha and Koni plants are in cascade, with Koni directly downstream from Mwadingusha on the Lufira River at the mouth of Lake Tshangalele, north of Likasi and approximately 250 kilometres northeast of Kamoa.

The Stucky Report, which also reflects terms of June 2012 pre-financing agreement between SNEL and Ivanplats, includes the following conclusions: 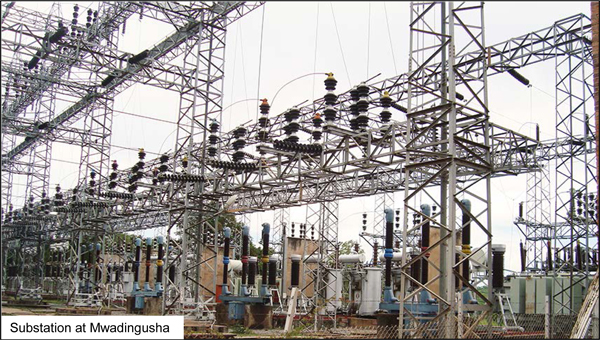 A 2011 MOU led to the signing of a pre-financing agreement with SNEL in June 2012 under which SNEL granted Ivanplats an exclusive right to conduct full rehabilitation on the Mwadingusha and Koni plants following completion of a feasibility report on the work, which now has been satisfied by the Stucky Report.

The rehabilitation would be jointly developed by SNEL and Ivanplats under an Engineer, Procurement and Construction Management (EPCM) contract, with direct responsibility and involvement of Ivanplats in the project implementation. Development work is expected to commence as early as August 2013, with a target of completion in 2017.
Ivanplats and SNEL are in the process of settling definitive agreements for financing, operation and maintenance of the project.

Given the scale of Ivanplats’ planned involvement in the development of infrastructure in the DRC, Ivanplats is in discussions with European Export credit agencies and other financial institutions for project financing insurance and guarantees.

In September 2012, Ivanplats issued its initial Preliminary Economic Assessment (PEA) for Kamoa based on the September 2011 Mineral Resource Estimate (the Kamoa Copper Project Technical Report available at www.sedar.com). The PEA was for the construction and operation of a long-term underground mine, concentrator processing facility, smelter operation and associated infrastructure, and was based on an estimated initial capital cost of approximately $2 billion. The mining rate and concentrator feed capacity was established at five million tonnes per annum (Mtpa), producing 143 thousand tonnes per annum (ktpa) of payable copper on average in the first 10 years of operation, at an estimated cash cost (net of by-product credits) of 95 cents a pound. The production scenario scheduled 299 million tonnes of material over 61 years, producing 7.8 million tonnes of blister copper.

Preliminary work indicated that a mining rate of 7.5 Mtpa may allow for more efficient use of capital and that production at the project may be scalable up to 20 Mtpa.

The PEA is preliminary in nature and includes Inferred Mineral Resources that are considered too speculative geologically to have economic considerations applied to them that would enable them to be categorized as Mineral Reserves and consequently there is no certainty that the PEA will be realized.

Ivanplats intends to issue an updated PEA around the end of second quarter of 2013 that incorporates the results of the December 2012 Mineral Resource Estimate.

Mr. Friedland said that Ivanplats is engaged in ongoing, detailed discussions with various major international mining industry participants with a view to Ivanplats selecting a strategic partner to participate in financing and developing the Kamoa Project and associated infrastructure.

“Kamoa is unique in its size and grade and Ivanplats believes that significant advantages could be realized from the participation of one or more strategic partners,” Mr. Friedland added.

“Compared to most new greenfields mining projects, Kamoa has the unique advantage of being next door to the copper mining hub of Kolwezi at the western edge of the Copperbelt. This means that there is plenty of existing infrastructure in close proximity, such as power lines, roads and railways, but upgrading is required.”

Kamoa has been independently ranked as the largest, high-grade copper discovery in the DRC and as being among the world’s largest, undeveloped copper deposits.

The NI 43-101 compliant mineral resources estimates have an effective date of December 12, 2012, and were prepared in accordance with CIM Guidelines under the direction of AMEC’s Technical Director, Dr. Harry Parker.

Details of the December 12, 2012, Kamoa Mineral Resource, including a discussion of assumptions, parameters and methods, risks and uncertainties and the relevant qualified persons, are set out in the March 2013 Kamoa Technical Report, available on Ivanplats’ SEDAR profile at www.sedar.com.

Kamoa was discovered in 2008 by Ivanplats west of the known limit of the Central African Copperbelt in the DRC. The deposit lies under cover and does not outcrop. Kamoa is a very large stratiform deposit similar to the Polish Kupferschiefer and Zambian Ore Shale deposits.

In August 2012, Ivanplats’ application was approved to convert three exploration permits at Kamoa to Exploitation Licences that grant Ivanplats the right to explore for, develop and exploit copper and other minerals, for an initial 30-year term, expiring in 2042. The licences then can be extended for 15-year periods, until the end of the mine’s life. The Exploitation Licences covers an area of 400 square kilometres.

Pursuant to the DRC mining code, Ivanplats transferred for no consideration a 5% non-dilutable interest in Kamoa to the DRC government on September 11, 2012, as a condition of the granting of the exploitation permits. Ivanplats also has offered to sell an additional 15% interest to the DRC Government on commercial terms.

The copper mineralization identified at Kamoa is typical of sediment-hosted stratiform copper deposits. A regional exploration program also is ongoing, with drilling planned at prospective targets on more than 9,000 square kilometres of exploration tenements held by Ivanplats in a variety of geological settings within Katanga Province.

The scientific and technical information in this release pertaining to the Kamoa Project has been reviewed and approved by Stephen Torr, Ivanplats’ Vice President, Project Geology and Evaluation, a Qualified Person under the terms of National Instrument 43-101.

Ivanplats (TSX:IVP), with offices in Canada, the United Kingdom and South Africa, is advancing and developing its three principal projects:

Ivanplats also is evaluating other opportunities as part of its objective to become a broadly based international mining company.

Statements in this release that are forward-looking statements are subject to various risks and uncertainties concerning the specific factors disclosed here and elsewhere in the company’s periodic filings with Canadian securities regulators. When used in this document, the words such as “could,” “plan,” “estimate,” “expect,” “intend,” “may,” “potential,” “should” and similar expressions, are forward-looking statements. Information provided in this document is necessarily summarized and may not contain all available material information.

The estimation of Mineral Resources is inherently uncertain and involves subjective judgments about many relevant factors. Mineral Resources that are not Mineral Reserves do not have demonstrated economic viability. The accuracy of any such estimates is a function of the quantity and quality of available data, and of the assumptions made and judgments used in engineering and geological interpretation (including estimated future production from the Kamoa Project, the anticipated tonnages and grades that will be mined and the estimated level of recovery that will be realized), which may prove to be unreliable and depend, to a certain extent, upon the analysis of drilling results and statistical inferences that may ultimately prove to be inaccurate. Mineral Resource estimates may have to be re-estimated based on: (i) fluctuations in copper or other mineral prices; (ii) results of drilling, (iii) metallurgical testing and other studies; (iv) proposed mining operations, including dilution; or (v) the evaluation of mine plans subsequent to the date of any estimates.