The new estimate increases Kamoa’s Indicated Mineral Resources to a total of 739 million tonnes grading 2.67% copper, containing 43.5 billion pounds of copper - an increase of 115% over the previous September 2011 estimate of 348 million tonnes, containing 20.2 billion pounds of copper. Both estimates used a 1% copper cut-off grade and a minimum vertical mining thickness of three metres.

The latest AMEC estimate, based on core from 555 holes drilled to December 10, 2012, at Kamoa on the Central African Copperbelt in the DRC’s Katanga Province, was prepared in accordance with CIM Guidelines under the direction of Technical Director Dr. Harry Parker.

“The combination of large tonnages and very high copper grades establishes Kamoa as the largest high-grade copper discovery in Africa - and one of the largest undeveloped copper deposits in the world,” said Mr. Friedland.

“Kamoa is a Tier One Discovery in terms of size and grade. While we’re still delineating the deposit, Kamoa already is distinguished as the world’s largest, undeveloped, high-grade copper discovery. In fact, among large-scale, undeveloped, primary copper deposits, characterized as having resources larger than 750 million tonnes, Kamoa has one of the highest copper grades in the world. Most new copper porphyry projects tend to have average grades in the 0.3%-0.6% copper equivalent range, which is less than one-fifth of the grade at Kamoa.”

Mr. Friedland said that the new resource estimate is further confirmation that Kamoa has the resources to support a large-scale, low-cost copper mine using conventional mining methods.

“The resources defined to date cover only a small portion of the 400-square-kilometre Kamoa mining licence and we are confident that additional drilling will continue to expand the resources.”

The true thickness of the Kamoa copper mineralization varies from 2.4 metres to 17.6 metres, at a 1% copper cut-off. The deposit is relatively flat lying, dipping between 0 and 20 degrees. The deposit dips generally west to east and at its deepest has been intersected at more than 1,500 metres below surface. High-grade bornite-chalcocite mineralization remains open down-dip to the east and along strike to the south.

Mr. Johansson said that the goal of the 2012 drilling program at Kamoa was to support the conversion of Inferred Mineral Resources within the conceptual open-pit and underground mining areas into the Indicated classification. “The results show that the program was a resounding success and more than doubled the Indicated tonnage.”

The area surrounding the Indicated and Inferred Mineral Resources, and inside the perimeter of Ivanplats’ resource model, is considered to be an Exploration Target. Canadian disclosure standards under NI 43-101 allow the estimated quantities of an Exploration Target to be disclosed as a range of tonnes and grade. Tonnages and grades were estimated by constructing an inverse distance model to the fifth power for the area and applying a ±20% variance to the tonnages and grades. Using this method, the current Kamoa Exploration Target could contain 520 to 790 million tonnes grading 1.6% to 2.5% copper.

Other exploration prospects exist along strike to the south, where additional copper-in-soil anomalies are associated with footwall domes (Kakula and Kakula Northeast) analogous to Kamoa and Makalu. Currently, there is insufficient information to project a range of tonnage and grade for these exploration prospects, although some of the area that has been drill-tested (four drill holes) has intersected thick mineralization with similar stratigraphy to that found around the Makalu dome. There is untested potential to find additional resources over large areas of the Kamoa Licence. Drilling is planned through 2014 on these areas.

Figure 1: Kamoa plan map showing total copper grade for Indicated and Inferred Mineral Resources. Area between the Resources (colored blocks) and model limit is considered to be the Exploration Target. 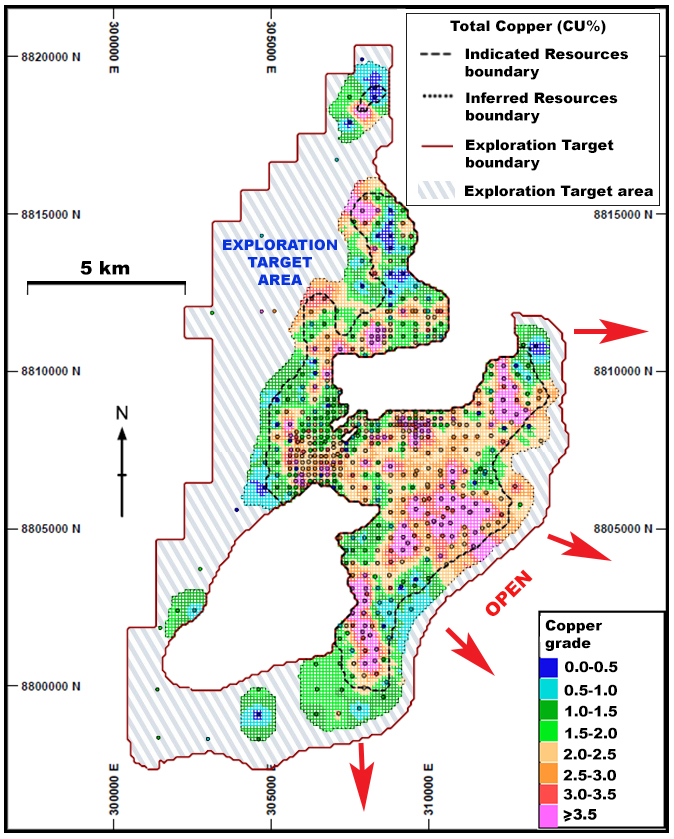 In September 2012, Ivanplats issued its initial Preliminary Economic Assessment (PEA) for Kamoa based on the September 2011 Mineral Resource Estimate (the Kamoa Copper Project Technical Report available at www.sedar.com).The PEA was for the construction and operation of a long-term underground mine, concentrator processing facility and smelter operation and associated infrastructure, and was based on an estimated initial capital cost of approximately US$2 billion.

Given the significant estimated Mineral Resource tonnage and its large lateral extent, potential mining rates could range from 5 Mtpa to 20 Mtpa through operating in multiple mining areas and a series of production expansions to maximize extraction of the Mineral Resource.

The PEA was preliminary in nature as it included Inferred Mineral Resources that are considered too speculative geologically to have economic considerations applied to them that would enable them to be categorized as Mineral Reserves. There is no certainty that the PEA will be realized.

Ivanplats intends to use the new resource estimate as the basis for an updated PEA that is expected to be released in the first half of 2013. Initial engineering work on the new PEA indicates that an increased initial production rate of 7.5 Mtpa may allow for more efficient use of capital. The updated PEA also will investigate production expansion scenarios. 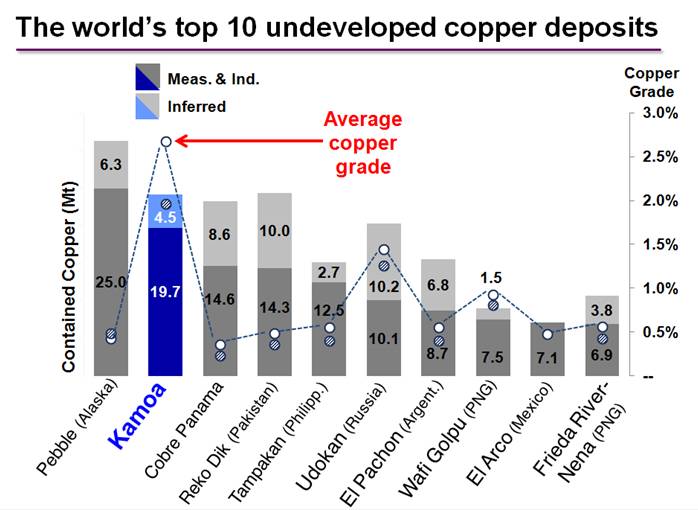 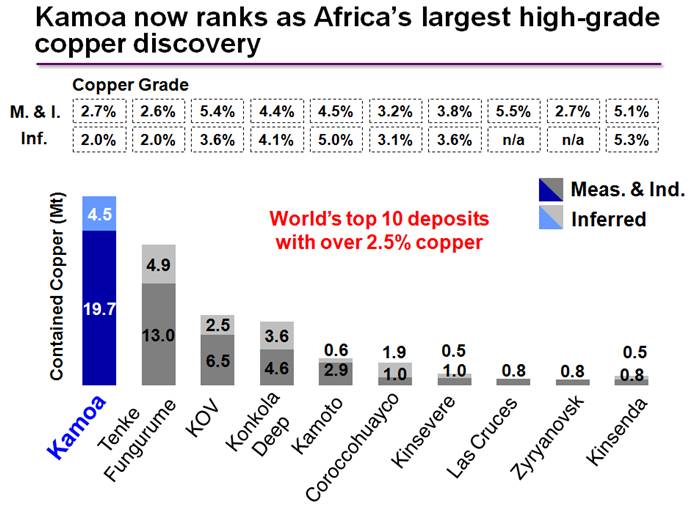 Kamoa was discovered in 2008 by Ivanplats west of the known limit of the Central African Copperbelt in the DRC. The deposit lies under cover and does not outcrop. Kamoa is a very large stratiform deposit similar to the Polish Kupferschiefer and Zambian Ore Shale deposits.

In August 2012, Ivanplats’ application was approved to convert three exploration permits at Kamoa to exploitation permits (mining licences). The Kamoa Mining Licences, covering a total of 400 square kilometers, allow the company to develop and exploit copper and other minerals for a renewable 30-year term.

The copper mineralization identified at Kamoa is typical of sediment-hosted stratiform copper deposits. A regional exploration program is ongoing, with drilling planned at prospective targets on the more than 9,000 square kilometres of exploration tenements held by Ivanplats in a variety of geological settings within Katanga Province.

Increase of 120% in highest-grade copper

Michael Gray, Ivanplats’ Chief Operating Officer, noted that the new AMEC resource estimate reports a 120% increase in the amount of copper at the highest reported cut-off grade of 3% copper, as compared to the prior resource estimate and based on a similar grade and thickness.

“Kamoa now has Indicated Mineral Resources of 224 million tonnes grading 3.85% copper at a 3% cut-off grade, which we believe is a highly significant consideration in the development of our initial mining strategy.”

Mr. Friedland said that Ivanplats is engaged in ongoing, detailed discussions with various major international mining industry participants with a view to Ivanplats selecting a strategic partner to help finance and develop the Kamoa Project and associated infrastructure.

”Kamoa is unique in its size and grade, a fact now recognized by many industry and sovereign investors in the copper-mining industry. Ivanplats believes that significant advantages could be realized from the participation of one or more strategic partners.”

Ivanplats expects to issue an updated, independent resource estimate for its South African Platreef PGM Discovery in February 2013. The Platreef Project includes a recently discovered underground deposit of thick, PGE-nickel-copper-gold mineralization in the Northern Limb of the Bushveld Complex, located approximately 280 kilometres northeast of Johannesburg. PGE-nickel-copper-gold mineralization in the Northern Limb primarily is hosted within the Platreef, a mineralized sequence that is traced more than 30 kilometres regionally along strike.

Ivanplats currently has a NI 43-101-compliant Inferred Mineral Resource for Platreef, dated March 2011, of 175 million tonnes grading 4.6 g/t 3PE (platinum (2.09 g/t)+palladium (2.19 g/t)+gold (0.33 g/t)), 0.41% nickel and 0.20% copper within a 3 g/t 3PE grade shell. This Mineral Resource lies within a flat to gently dipping portion of the Platreef, termed the “Flatreef”, at relatively shallow depths of 700 to 1,100 metres and an average vertical thickness of 16.8 metres. Details of the March 2011 Platreef Mineral Resource, including a discussion of assumptions, parameters and methods, risks and uncertainties and the relevant qualified persons, are set out in the Platreef Technical Report dated August 20, 2012, available on Ivanplats’ Sedar profile at www.sedar.com.

AMEC reviewed the quality-control data for all copper assays and concluded that the quality assurance program of the Kamoa Project demonstrated sufficient accuracy and precision of the copper assays for use in estimating copper Mineral Resources.

The Kamoa underground resource model was constructed as follows:

The scientific and technical information in this release has been reviewed and approved by Stephen Torr, Ivanplats’ Vice President, Project Geology and Evaluation, a Qualified Person under the terms of National Instrument 43-101.

The updated Kamoa resource estimate was prepared using substantially the same assumptions, parameters and methods, and is subject to the same risks and uncertainties as that set forth in the Ivanplats’ technical report on the Kamoa Project dated September 5, 2012 and available on Ivanplats’ Sedar profile at www.sedar.com.

Ivanplats maintains a comprehensive chain of custody and QA-QC program on assays from its Kamoa Copper Project. Half-split core is prepared at Ivanplats on-site preparation laboratory before being shipped to Ultra Trace Geoanalytical Laboratories in Australia for external assay. Industry standard certified reference materials and blanks are inserted into the sample stream prior to dispatch to Ultra Trace. Ivanplats’ QA-QC program is independently monitored by AMEC E&C Services and is described in detail in the National Instrument 43-101 technical report for the Kamoa Project filed on www.sedar.com.

Ivanplats (TSX:IVP), with offices in Canada, the United Kingdom and South Africa, is advancing and developing its three principal projects:

Ivanplats also is evaluating other opportunities as part of its objective to become a broadly based international mining company.

Statements in this release that are forward-looking statements are subject to various risks and uncertainties concerning the specific factors disclosed here and elsewhere in the company’s periodic filings with Canadian securities regulators. When used in this document, the words such as “could,” “plan,” “estimate,” “expect,” “intend,” “may,” “potential,” “should” and similar expressions, are forward-looking statements. Information provided in this document is necessarily summarized and may not contain all available material information.

The estimation of Mineral Resources is inherently uncertain and involves subjective judgments about many relevant factors. Mineral Resources that are not Mineral Reserves do not have demonstrated economic viability. The accuracy of any such estimates is a function of the quantity and quality of available data, and of the assumptions made and judgments used in engineering and geological interpretation (including estimated future production from the Kamoa Project, the anticipated tonnages and grades that will be mined and the estimated level of recovery that will be realized), which may prove to be unreliable and depend, to a certain extent, upon the analysis of drilling results and statistical inferences that may ultimately prove to be inaccurate. Mineral Resource estimates may have to be re-estimated based on: (i) fluctuations in copper or other mineral prices; (ii) results of drilling, (iii) metallurgical testing and other studies; (iv) proposed mining operations, including dilution; or (v) the evaluation of mine plans subsequent to the date of any estimates.

Statements in this release that constitute forward-looking statements or information include, but are not limited to: (1) Ivanplats plans to develop Kamoa into what could eventually become one of the world’s largest and lowest cost underground copper mines; (2) the expected timing and results of the updated Kamoa PEA; (3) the potential scalability of the Kamoa Project and future mine planning studies, (4) upgrading of some or all of exploration targets to a mineral resource, and (5) the expected timing of the new resource estimate for the Platreef Project.

All such forward-looking information and statements are based on certain assumptions and analyses made by Ivanplats’ management in light of their experience and perception of historical trends, current conditions and expected future developments, as well as other factors management believes are appropriate in the circumstances. These statements, however, are subject to a variety of risks and uncertainties and other factors that could cause actual events or results to differ materially from those projected in the forward-looking information or statements. Important factors that could cause actual results to differ from these forward-looking statements include those described in Ivanplats’ Prospectus dated October 16, 2012 under the heading “Forward-Looking Statements” and “Risk Factors” and under the heading “Risks and Uncertainties” in the company’s most recently filed MD&A. Readers are cautioned not to place undue reliance on forward-looking information or statements.